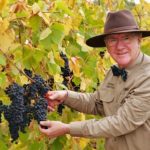 In this new multi award winning film, we trace the footsteps of the late Burton Wyndham Hamilton, the father of legendary winemaker Dr Richard Hamilton. On several trips across the country, Richard takes the opportunity to visit the outback and experience and participate in some of the jobs his father would have undertaken while working on sheep and cattle stations in the 1920’s.

At the 51st US International Film & Video Festival, it was presented with  a GOLD CAMERA AWARD and Best of show  from among more than 1000 entries from over 27 countries. It also achieved a Silver Dolphin trophy, in 2018 at the 9th Cannes corporate Media and TV awards in France